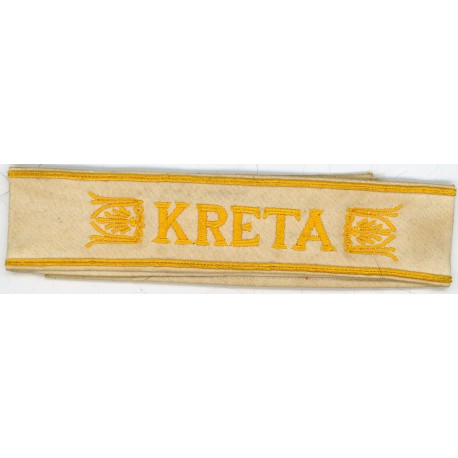 Circa 40ies of 20th centure.Consistent with its age, Please see scans!

The pictures are from actual item that you will recieve.

Germany, WWII KRETA armband for Wehrmacht involved the invasion of Crete, May 1941.

The "Kreta", (Crete), cufftitle was the first in a series of four, campaign award, cufftitles and was introduced on October 16TH 1942, for award to personnel who participated in the successful assault on the Greek, Mediterranean island of Crete from May 20TH to June 1ST 1941. The cufftitle was considered a military combat decoration, and as such, was bestowed with a corresponding award possession document and entered into the recipient’s official military service documentation. Bestowal of the award was opened to personnel in all three branches of service who had actively been involved in the invasion of Crete. The "Kreta" cufftitle was worn on the lower left sleeve of the field blouse, service tunic and greatcoat by all eligible personnel with no differentiation for rank. Of Note: The "Kreta" cufftitle utilized acanthus leaves as ornamentation which is a perennial herb or shrub native to the Mediterranean area and has been used through-out ancient history as ornamentation in art and architecture. The acanthus leaves symbolize quality, strength, longevity and creativity. The "Kreta" cufftitle was manufactured in two slightly different versions with one version having seven acanthus leaf petals and the other with nine. Due to the significant role that the German Fallschirmjäger, (Paratroopers), played in the successful invasion they were awarded a large percentage of the "Kreta" cufftitles. Of Note: The Greek, Mediterranean island of Crete was very strategically important to the Allies affording them secure naval harbors in the eastern Mediterranean and airfields within range of the significant, German allied, Romanian oilfields. Although the German’s had successfully utilized it’s Paratrooper and Glider borne Infantry on a limited basis, in Denmark, Norway, Belgium, Holland, France and Greece, Unternehmen Merkur, (Operation Mercury), launched on May 20TH 1941, the German assault on Crete, was the first, primarily, airborne assault ever mounted with roughly half of the German participants being Paratrooper and Glider borne Infantry personnel. Although the operation was a success the German airborne casualties were considered so high by Hitler it prompted him to reevaluate German airborne assault doctrine and allegedly declare to Knight’s Cross of the Iron Cross, (later Oak-leaves to the Knight’s Cross holder), General der Flieger Kurt Student, that the ultimately important, surprise element of the Paratroopers had been eliminated and as a result the German’s never launched another large airborne assault during the remainder of the war. Also Of Note: The other three campaign award cufftitles consisted of the "Afrika" cufftitle as introduced on January 15TH 1943, the "Metz" cufftitle as introduced on October 24TH 1944 and the "Kurland", (Courland), cufftitle as introduced on March 12TH 1945.