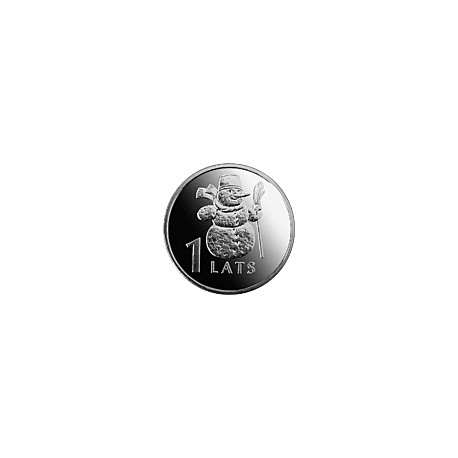 Obverse
The large coat of arms of the Republic of Latvia is placed in the center, with the year 2007 beneath it. The inscriptions LATVIJAS and REPUBLIKA, each arranged in a semicircle, are above and beneath the central motif respectively.

Reverse
A snowman holding a broom is in the center, with the inscription 1 LATS beneath it.

The snowman is a symbol of Christmas and winter in western cultures of the northern hemisphere. As such, he often appears on Christmas cards. The tradition of making snowmen dates back to the Middle Ages when townspeople rolled large balls of snow in the streets. Moist snow near melting point is needed for building a good snowman. Over the centuries, snowmen have acquired a variety of adornments. Carrots or pieces of wood are often used for the snowman's nose, bits of coal represent the eyes, little stones or twigs mark the button places on his coat, and a cane, stick or broom is placed in his hand. An upturned bucket or a pot is the regular headdress of the snowman, and sometimes he is dressed in people's clothes.

The largest snowman ever was built in the United States in February 1999. Yet any snowman, be he large or small, traditional or original, is a source of joy, particularly for children. A thawing snowman brings tears to people's eyes and the premonition of spring to their hearts.

The reverse of the coin features a snowman, with a scarf around his neck and a bucket as a hat, holding a broom as a symbol of activity and vitality.