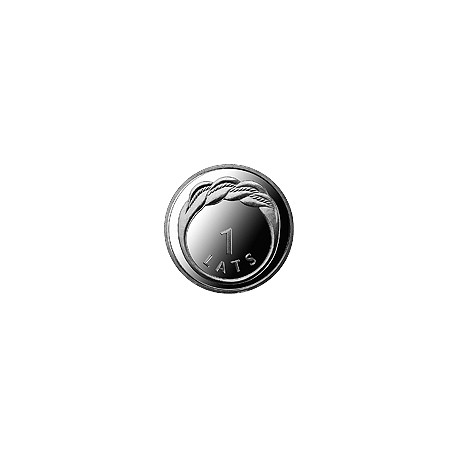 Obverse
The large coat of arms of the Republic of Latvia, with the year 2009 inscribed below, is placed in the centre. The inscriptions LATVIJAS and REPUBLIKA, each arranged in a semicircle, are above and beneath the central motif respectively.

Reverse
Namejs ring encloses the numeral 1 with the inscription LATS in a semicircle below it.

Namejs ring is among the most often replicated Baltic jewellery pieces: makers and wearers as well as archaeologists use this designation when referring to a certain type of ring. The ring is most popular with men, but women like to wear it too. The original ring has been found in territories populated by Latgallians and in castle mounds on the banks of the Daugava. Namejs rings are a relatively rare find not only because its production demanded and still demands a painstaking and skilful work on the jeweller's part but also because they were usually made of silver. This type of ring was named after the Semigallian chieftain Namejs only in the 1930s when two such rings were found in the Daugmale castle mound and they became favourites for replication and wearing. The popularity of the ring and indeed its very name originated with the novel "Namejs Ring" by Aleksandrs Grins and a portrait of Namejs by Ludolfs Liberts: entirely a product of the artist's imagination. Yet Namejs himself probably had never even seen this ring: the originals found in the gravesites are dated 12th or, at the latest, early 13th century when Namejs had not even been born; during his lifetime such rings were no longer worn. In addition, it was a Latgallian piece of jewellery that Semigallians did not use; the explanation for the Daugmale find is that in ancient times it was a crossroads for the trade routes of artisans and traders of various ethnicities. In the popular imagination, history has married legend and what is important is the concept instead of exact years and historical truth. Namejs ring has come to signify that the wearer has some relationship to Latvia: even if he or she belongs to a different nation, it is evidence that they have some connection with the Latvian land or culture.