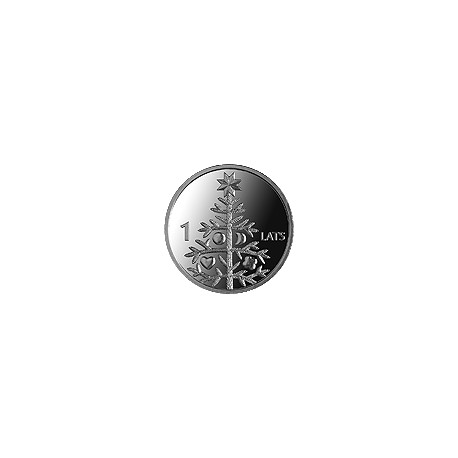 Obverse
The large coat of arms of the Republic of Latvia, with the year 2009 inscribed below, is placed in the centre. The inscriptions LATVIJAS and REPUBLIKA, each arranged in a semicircle, are above and beneath the central motif respectively.
Reverse
A decorated Christmas tree is depicted in the centre of the coin, with the numeral 1 and the inscription LATS placed to the left and right of it respectively.
Edge
Two inscriptions LATVIJAS BANKA (Bank of Latvia), separated by rhombic dots.
Fir-trees are evergreen conifers; in Latvia, they cover one fifth of all forest area. A fir-tree may grow as long as 120 years and reach a height of up to 40 metres. Though its "life expectancy" is over 300 years, more often than not a fir-tree is destined to a short-lived life, albeit in exchange for the opportunity to bring people much joy. Since we are becoming increasingly environment conscious, our Christmas tree is frequently cultivated or even artificial rather than one felled right there in the thicket.
In Latvia, the tradition to decorate a fir-tree has a history that spans five centuries. The solstice rituals of the Latvians of yore - series of masquerades starting on Mārtiņš (St. Martin's) Day in November and ending at Meteņi (or Vastlāvji, an approximate pagan Latvian counterpart for Shrove Tuesday) in February - cohabitate with Christian traditions of Advent and celebrating Christmas. In Christianity the fir-tree symbolises the tree of knowledge in the Garden of Eden and Christ's gift - the hope of eternal life, but the lit candles in the tree are a reflection of the light Christ brought to a world of darkness.
Honouring Christ's birth, it was in Riga where for the first time ever a Christmas tree was adorned with flowers and then burnt in 1510 before Shrove Tuesday. To commemorate this event documented by the Brotherhood of Blackheads, a memorial plate in eight languages was laid in the cobbled square in front of the Riga Town Hall a couple of years ago. The Christmas Archives in the United Kingdom, too, have identical information. In the Christian world, the Christmas tree tradition first spread in the German lands and then to Great Britain, the United States, and elsewhere.
The festive merriment of seeing the old year out and the new year in goes hand in hand with peace of mind and self-purification. It unites us and asks to take care of those who have been less lucky. A glittering Christmas tree with candles lit in its branches is a symbol that helps us find our common way to peace, harmony, and goodwill.