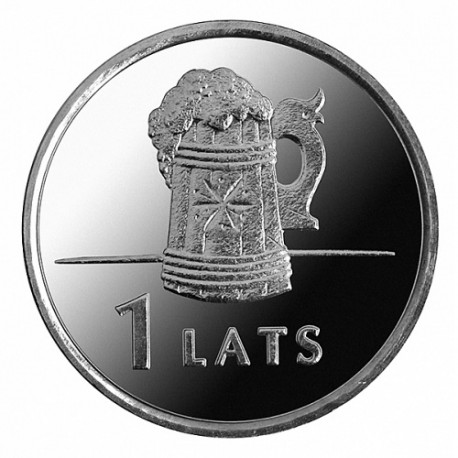 Obverse The large coat of arms of the Republic of Latvia, with the year 2011 inscribed below, is placed in the centre. The inscriptions LATVIJAS and REPUBLIKA, each arranged in a semicircle, are above and beneath the central motif respectively.   Reverse A beer mug is in the centre, with the inscription 1 LATS beneath it.   Edge Two inscriptions LATVIJAS BANKA, separated by rhombic dots.   As the summer solstice bonfires light up the shortest night of the year, you may hear strains of this Latvian folksong: "Drink, brother, a mug of beer, So that rye and barley may grow..." As the solstice – Līgo – rituals are repeated every year, the beer mug, one of the symbols of the festivities is never forgotten. Its oldest ancestor in Europe is the beer pitcher found in an excavation in Germany that dates from about 800 B.C. Today beer mugs are made in all sizes and from all kinds of materials; they serve practical purposes or are admired as souvenirs and works of art. An example is the three beer mugs chiselled out of stone by artist Aivars Kerliņš and presented by the company Cēsu alus to Cēsis, the first Baltic town with its own beer brewery dating from 1590, on the occasion of city's 800th anniversary. The vast majority of beer mugs, however, are intimately familiar with the beverage that lent them their name. A barrel of beer in the cellar, A can at the top of the table. One mugful of beer and another, Let all the guests drink their fill. After water and tea, beer is the third most popular beverage in the world. The builders of the Egyptian pyramids were given three vessels of beer per day. The Latvian peasants working at the local German estate likewise earned a stops (1.2 litres) of beer a day. The modern Latvians, however, are said to lag a little behind the Lithuanians and Estonians. Even though the history of beer is almost as long as man's ability to grow barley and is preserved in written and drawn records for thousands of years, its recipes have always been subject to change and development, with the classical components (malt, water, yeast and hops) supplemented with various other substances (honey, muscatel grapes, saffron, rosemary, myrtle, heather, wormwood, yarrow, etc). The most sophisticated brewers and most diligent keepers of recipes in Europe were monks who staved off disease and strengthened themselves by drinking beer instead of impure water. According to chronicles, among the first such brewers were the Benedictines at the monastery of St. Gallen in Switzerland: their brewery was founded in 820. During the Franco-Prussian War, Louis Pasteur sought to improve the process of fermentation to make beer that would be superior to the German kind. This research fuelled by the passion of revenge helped to improve the taste of beer by adding better quality yeast. Beer was considered a tonic, a disinfectant, and a fortifying drink, that is why in the 18th century and at the beginning of the 19th century medicine was given to hospital patients together with beer. Light beer with a small percentage of alcohol (2.75%) was not banned in the United States even in the Prohibition Era (1919–1933). Beer is said to help against insomnia; beer seen, drunk or brewed in a dream is supposed to signify imminent rain.